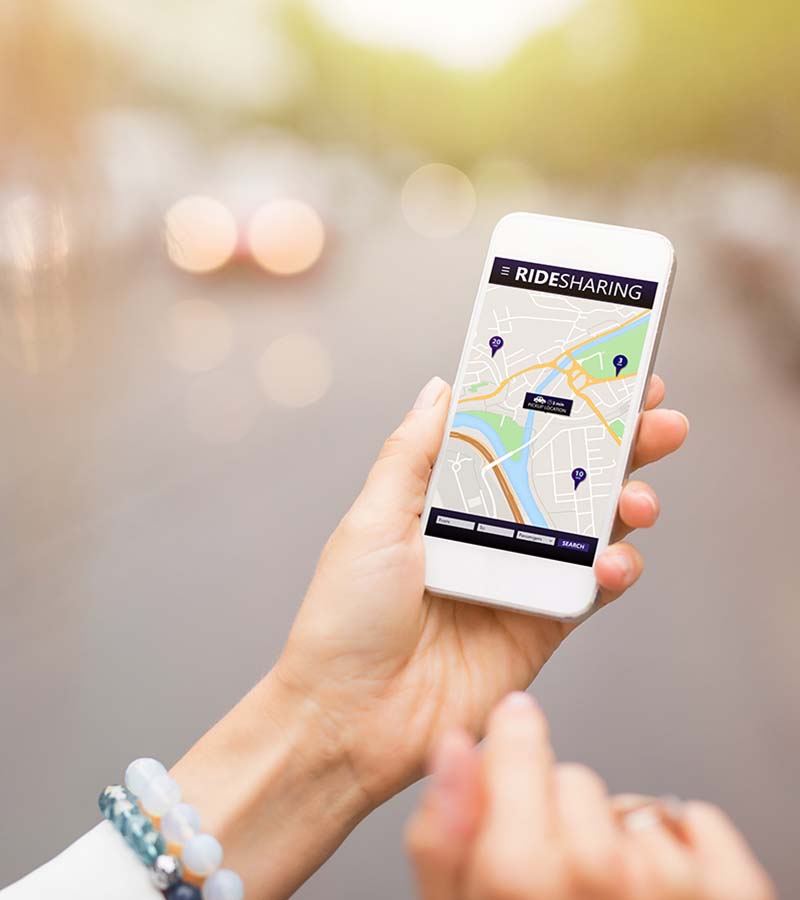 Since Uber & Lyft were introduced in 2009 and 2012 respectively, they have shaken up the transportation landscape dramatically. Both companies provide ridesharing services which makes it not only easier, but more affordable, to get from one place to another.

Ridesharing, by definition, is when a person uses their car as a transportation vehicle for a nominal fee; however, unless they have a relationship with a ridesharing company, they cannot charge people for driving them around. This is why they work for Lyft or Uber which are both approved to offer these services to customers. In order to call for a ride, a user will download and install the Uber or Lyft app on their smartphone, which also tracks their exact location. With a few clicks, a passenger can easily request a ride.

A caveat to using ridesharing services is that there is always the possibility of a car accident. Injuries sustained in car accidents can be severe and costly. If you were a passenger who suffered injuries in a car accident in an Uber or Lyft vehicle, you should contact Dash Injury Law Firm right away. We will provide you with free consultation to help you determine how your accident should best be handled so you won’t have to face the insurance companies on your own.

After an Uber/Lyft Accident

A person can become seriously injured in a car accident. You need to receive medical attention from a healthcare provider immediately if you become injured in an accident. You might not have any pain right away, but you may have symptoms within a few days following the accident.

Some common injuries one may experience after a vehicle accident include:

Some common situations that can occur with ridesharing include:

If your injuries were due to someone else’s negligence, you could be eligible to receive compensation for long-term medical care, pain and suffering, injuries, or lost wages.

Who is Responsible for a Ridesharing Vehicle Accident

Typically, if you are driving your own vehicle and you get into an accident with another driver, you would file a case against them if he/she is wholly or partially at fault for the collision. But when someone is using their vehicle as part of their job, as is the case with ridesharing, you can sue the driver’s employer if the driver was acting appropriately within their employment scope. The popularity of ridesharing services has made it much more difficult to sue ridesharing companies like Lyft and Uber, depending on what state the accident occurred in.

There are a variety of different considerations, primarily because drivers technically are not employed by the ridesharing companies themselves. All of the drivers are independent contractors. This means that while they are not employees, they have a contract with the ridesharing company. They receive money for their services through a non-employment relationship they have established with Uber or Lyft. Because they are self-employed, they are doing work for the company – they are just not working for the company. A normal employment situation would hold the employer accountable for the employee’s actions. As far as independent contractors are concerned, the drivers are only responsible for just themselves. This structured arrangement keeps ridesharing companies from accepting responsibility for accidents which, according to Uber & Lyft, is a good business model for them. If a driver does something reckless and irresponsible, suing these companies can prove to be quite challenging and difficult.

This does not mean, however, that a person who becomes injured in an accident with an Uber or Lyft driver can not hold the driver accountable, because they are the ones who are responsible for their actions on the road. The ridesharing company is not.

Do Insurance Companies Play a Role?

In many circumstances, whenever someone is driving for Lyft or Uber, their personal auto insurance policies do not cover them should they and another passenger become involved in an accident.

This means that there are compensation limits on how much money an injured person can receive if they become injured in an accident with an Uber or Lyft driver. The victim may only be able to recover to the extent of the t supplemental insurance policy limit and not a penny more if the Uber/Lyft driver was neglectful. There are some judgments that surpass the amount of insurance coverage, but those judgments will still be against the driver and not Uber. Beyond the amount of Uber’s insurance policy limit, accident victims will not be able to collect any additional money from them. The driver will not have enough of their own personal assets to cover any judgment brought against them, and they would likely seek bankruptcy protection in the event of a large enough verdict.

Can a Lawsuit Be Filed Against Lyft or Uber?

This is where things become more legally complex – some victims have tried to sue the ridesharing companies for the irresponsible, reckless actions of their drivers. The victim may be able to recover a better settlement from a ridesharing company if the driver’s actions are egregious enough. There is a good chance that the victim can actually sue the ridesharing company if the passenger was intentionally harmed by a driver. These instances include unwanted sexual assault against a passenger. Because the driver is an independent contractor, this technicality may be difficult to overcome if you try to hold the company responsible.

The corporate arrangement between rideshare companies and their drivers is highly controversial. Both Uber & Lyft have faced backlash regarding how their drivers are treated, in addition to escaping liability for something that an independent contractor did. Numerous court cases have challenged Uber & Lyft’s ability to treat drivers as independent contractors instead of actual employees.

Uber & Lyft drivers are still independent contractors. Both companies have offered their drivers extra compensation instead of accepting legal responsibility for their drivers’ actions. Legislation is being considered by some states that would require Uber & Lyft to hire drivers as employees instead of independent contractors. If drivers are not considered employees, they will not show up on the company’s payroll, which makes it more difficult to sue them should a victim become injured in an accident.

Even though the company has its own insurance policy in addition to any coverage the driver has, it is not easy to recover damages in the event of a Lyft or Uber accident. Any claims made against the ridesharing company’s insurance policy may still not be granted. The insurance company administers all of their policies, which means that they will try to find loopholes to prevent accident victims from being able to recover financially from any damages or injuries they may have sustained.

The driver’s insurance company is another set of challenges a victim has to deal with. Insurance companies will try to offer a victim the least amount of money possible to settle their claim. They will even use deceptive tactics to keep from having to pay you much of anything. They will offer lowball settlements or take advantage of anyone who isn’t sure how much their claims are actually worth. More often than not, they will deny claims made by accident victims so they will not receive any compensation at all even if the accident is not the victim’s fault.

Our personal injury attorneys at Dash Injury Law Firm can help victims of Uber or Lyft accidents take legal action that will advance their legal rights. We are skilled and have years of experience dealing with car accident litigation cases. We know how to handle the complex litigation of Uber & Lyft accidents as well as the insurance companies that attempt to offer accident victims lowball settlements. If an insurance company knows that a victim is being represented by an attorney, they tend to be more fair, and in turn, offer better settlements.

We are dedicated to fighting for the compensation and justice our clients rightfully deserve. Call our legal team today at 888-(DASH-LAW) or complete an online contact form.